In 2008, the Lord Lyon, King of Arms for Scotland granted SAMS a “Coat of Arms” Different from a coat of arms granted to an individual (and owned by the individual and heirs only) the arms granted to SAMS are a “Corporate” coat of arms and can be worn by all members of SAMS.    This is similar to a Corporate Logo (such as “Ford” in a circle of blue) that can be worn on a hat, shirt, jacket, or displayed on signs etc.

SAMS has computerized the full Coat of Arms, a Logo, and an “Arms” flag.    Examples follow.    The Lord Lyon granting arms to SAMS is somewhat unique.    Very few American organizations have been granted formal Scottish arms.    If you wear or display SAMS’ Arms, do it proudly, and do it correctly (see below).

A “Coat of Arms” is actually an article of clothing that was worn by a knight.    However, in modern times, the term is generally used to refer to a heraldic “Achievement”.    The Achievement is a depiction of the devices that represent an individual or organization.    It can include a crest, helm, shield, motto, mantel and sometimes supporters and a compartment for the supporters to stand upon.    The Full Achievement of the Scottish-American Military Society’s “Arms” along with the “Arms” flag and the Arms in the format used by SAMS as a Logo are shown below.    When identifying the arms Scottish American Military Society must be used, and optionally Society Noble in the Noblesse of Scotland may be used. 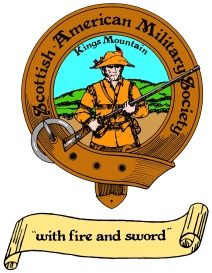 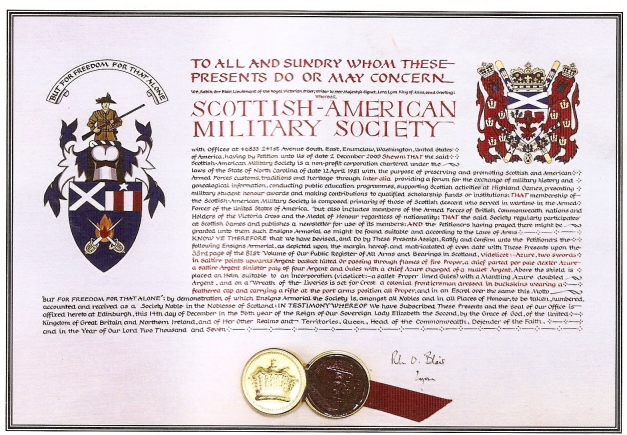 The SAMS “ARMS” and You:

As a member of SAMS, you are entitled to wear or display the SAMS Coat of Arms.    This is because the Lord Lyon of Scotland when he issued the “Arms”, he issued them as “Corporate Arms”.    Whereas, Clan members can wear only the “Crest” of their Chief’s arms (in our case the Over Mountain Man) circled with a “belt” and inscribed with the Clan “motto”, SAMS members can wear the complete arms.

We wear on our hats the “SAMS Badge” which is similar to a clan Crest.    Our full “Arms” (above) are shown on the cover in its appropriate colors (and the only coloring allowed).    The SAMS “Arms” flag is also shown on the cover (note it displays the “Arms” as shown on the “Shield”).    The SAMS “Logo” above displays the “Shield”, the “Helmet”, and the “Mantle” which represents the clothing a Knight’s clothing upon which his arms were worn.    Note that the script over the “Arms” is the official SAMS “motto” while “With Fire and Sword” is not part of our Arms but remains our “Call to Arms” or slogan and remains on our Cap Badge.    The text shown can be properly used with the “Arms”.

SAMS is beginning to make items available displaying the “Arms”.    The “Arms” flag is being field tested by 12 Posts.    The full “Arms” have been placed on the back of a T-shirt with a color SAMS Badge on the front.    Also, a test formal Blazer Badge in the form of our “Logo” has been made using silver, gold and white metal threads.    All of these items are in limited production, and are in full color.    The T–shirt and Blazer Badge are available from the Quartermaster in limited quantities to test their reception by the membership.

SAMS encourages Posts and members to use the “Arms” in advertizing SAMS, and our new status in the Scottish community.    However, note that the “Arms” must be used as shown with no modifications.    Backgrounds, if used, must not include a color used in the arms, and must not display any pattern.    If , as a Post or Camp you wish to develop a design it must be limited to adding only the Post or Camp name and/or number.    Members may add their name below the text shown which would have to appear first below the “Arms”.    Any design varying from that just listed must be approved by the Quartermaster in order for SAMS to control its “Arms” and its ownership rights.    SAMS’ Arms may not be produced by any commercial firm for use outside SAMS membership without the express written permission of SAMS.